The Amiga Future 157 will be released on the 5th July.
More informations

cevoner wrote:Got wireless now too. The dhcp was not reliable. Only with a wired connection. The wireless connected only a few times so I went back to static. Now it connects every time. It helps that I do not have to reboot every time now that I bought it. I made a minor change, used netshutdown and tried again.

I really, really would like to know what your DHCP server is doing to poor Roadshow, which is just trying to do its job, anyway...

Which make and model router are you using again?

The working combo happened by me logging into my router from my mac and checked all settings. I found 192.168.1.10 was a free wireless address and used that. Also added 127.1 as my amiga address. This was done in "hosts" which was not done before. Kept prism2 in storage and used name servers and routes as before. Hope this helps with your manual.

All is good now. Thanks and keep us informed of updates.

Slotting in an unused IPv4 address certainly avoids the DHCP problems. Still, the DHCP negotiation is supposed to work, and if it doesn't, there better be some kind of reason for it

Why did you set 127.1 as the Amiga's host name? Which problem did it solve for you?
Top

It was asking for that. Once I set it it connected.
It does not stay connected however. I think wirelessmanager
may have issues. I'm trying another wireless pcmcia card to see if that helps.
Top

Hi,
Back in 2014 you helped me get online with Roadshow. Well, now I have changed to OS 3.2.1 and I had to reinstall it and I cannot get online again. My IPs have changed and I have 2 Amigas: one with Mediator with a DFE 530TX card and one with a 3c589 PCMCIA card which worked well with OS3.9. Both display same message.

When I use addnetinterfaces I get "Could not add interface "name" (input/output error)" message no matter what I change in routes, networks, or name_resolution. I moved the 3c589 and MediatorFAST between storage and devs with no change. I had to reinstall Roadshow and updated to 1.14.
My IPs on network are attached when I enter arp -a on my PC. 10.0.0.1 is my router.

Can you help me again? I don't know what is going on here. Both cards are blinking and seem to be live.
It was a simple solution last time. Thanks for your time. 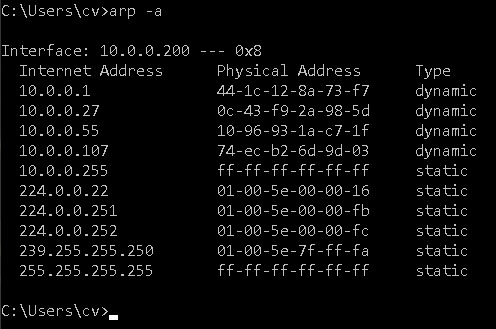