The Amiga Future 158 will be released on the 5th September.
More informations

1990-93`s Edition is a fascinating strategy game, in which you have to try to advance from being the founder of a political party to become elected prime minister. But beware! Faster then you might think, the party life may be over, bankruptcy may threaten you. Construct your own party policies, conduct speaches, visit talkshows, try to influence the media.

Do you aim to be supported by big business or do you put your emphasis on occupation of different positions, i.e. as national Greenpeace-chairman, as minister for the interior, becoming a state premier or the president of the federal bank.? But there are also election events to be conducted, and pity you, if you don't adjust your speeches to the current affairs and local problems! (pollution, unemployment ect.).

The Amiga-version requires at least 1 MB Ram and supports 2 disk drives or a hard drive. 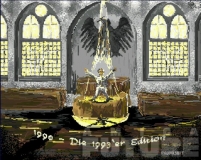