When the night falls, the celebrations of the never-dead begin in the graveyard. Countless Zombies und sinister beings rise from their resting places and have only one desire: YOU! Make your way through muddy tracks and dark grave chambers and slip into the role of the heavily armed Grim Reaper, or you will have to make your testament.

"You idiot! One more detonation like that and we're dead and covered with rocks," a man wheezed coughing dirt towards the other one who threw, just one moment ago, the sonic granade through the gap in a rock aiming to enlarge its mouth and to enable them to climb through to the rift behind it."Bullshit! Before we'd dig through we'd have grown old. This kinda granade is effective only in a short distance. Even if it fell down I've got the radio transmitter with underground locator so my people would get us outta here somehow anyway," other one responded and brushed off his suit. He was tall - a bit taller than the other two men so he was hitting the metal roof brackets sometimes which got him a little nervous. "You know what your people are gonna do, brother?" a sweet womanlike voice said. "Your people are just gonna give a fuck about you. I'll make a bet that every second man from your group is a regent's cop and our foxy uncle is looking forward how we all die." "Calm down! Here is another tunnel," a man with granade belt round his shoulders said. The group climbed through the hole enlarged by the sonic explosives a couple o' minutes ago and in front of them, there revealed a tight, long and down declining passage. Spotlights, coming out from their lanterns attached on their sleeves, slid over the walls and revealed the remains of the passage maintenance system. Sometime silvery shining pillars with hydraulic bars enticing the eternal fight with the weight of the ground now looked rusted and didn't make the feeling of safety in anybody newcoming. "So what are you staring at! This plan shows the way. Gotta go through that passage and break through the 5 feet thick wall. There is some caved little chimney and then - we're there." a man bellowed as he was looking at the holographic plan describing underground labyrinth. This plan looked like a little box as he was holding it in his hands. "In my eyes, all this story is a goddamn crock of shit. How can some oldster kicking the buckets for ages - if he ever existed - help us to dethrone a regent Walmer? I think we spent two days with fucking around for nothing," a second man said as he was taking the rest near the wall. The tall one bounced him: "O.K. Sherlock, you could stay outside. You're pain in the ass anyway." A woman stopped the fight. "Don't fight! We have to find the room, right? I also don't think the old mine, where the gold was exploited only 30 years ago, is the best place for the weekend outdoor party but we're here, aren't we?" "OK, look. We have to make something clear all right? Hort, listen!" a tall man yelled and jerked with his companion's shoulder. "We're looking for the tomb of the magus called Ghuwta. He lived 4 thousand years ago and this is a fact. He was a leader of the most powerful empire of the ancient world called Dlenvick and it is a fact too. If he wasn't insidiously killed he would have surely made his plans real. But he left only the Testament when he died and it's simple and clear." a man pulled a scrape of paper outta his pocket and started to read: "When the three stars cross the line Insar, Istar and the Telerain They'll become one and fine And their light go through the dark time. The Insar, Istar and the Telerain - that's Adgonish. These are three stars, how the fuck are they called... . Well, who give a shit. Their eclipse is repeated after 666 years. Once it was exactly when Ghuwta died. He was a clairvoyant and visionarist. He foretold when he's gonna die so he was prepared to die. And, mmmm, where's that, oh here it continues: Walk through the long hall and there, in a chamber, behind the wall you shall find... No, that's not it. It's goddamn long. I'll find the right part, mmmm, ya here we go: ... and then read the testament of mine I'll walk through the eternal time and then I'll reveal the gruesome power of mine I'll re-join the Empire of hundred years old fire The legend says that Ghuwta was an oppressor tyranizing all people. In addition, all sorcerers from the East hated him because they knew he was very powerful and he was not gonna take a rest until they all'd be killed. Then they joined their powers and Ghuwta died at very strange circumstances. It's romoured he was instructed about everything by his companions in advance. His body disappeared and it's said it was buried in the crypth beneath his castle."

The game "Testament" is designed for Amiga 1200 or higher (AGA). Minimal configuration: Amiga 1200, 2MB chip memory Recommended configuraton: Amiga 1200 or higher, accelerator with FastRAM, mouse or joystick, hard drive Supported: more floppy drives The major problems may occur due to lack of RAM space. Game's engine is a very complicated program processing a many data in a very short time so it must keep almost all data constantly loaded in RAM (the access to a hard disk and to a floppy disk is very very much slower). If the game will not work properly (after installation on the hard disk) please look for the solution in unavavilable free RAM. If you have only 2MB of this memory try to replace all devices, files, and disks' partition tables installed in RAM before you run Testament. The game should run while you have 1.8MB of computing memory free. If the game won't have necessary memory available it will never work properly. Enough space of available RAM can be provided either in upper workbench line or with the help of AVAIL command in command prompt (CLI). If only the FastRAM is installed the game will become much faster and stable but more then that you will be able to turn on the music and use more options otherway denied. 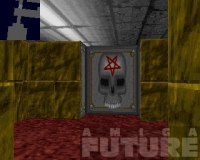 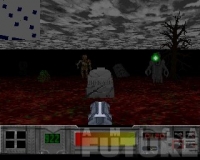